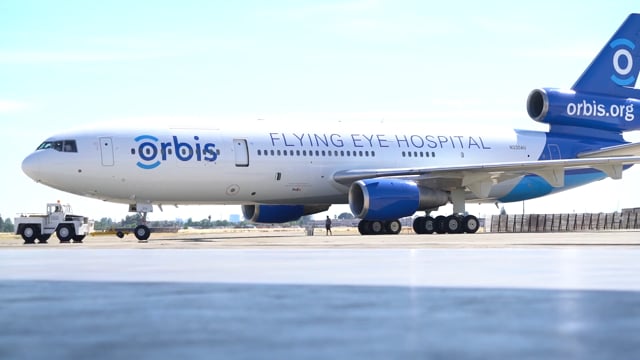 Exponentially increase the number of ophthalmic professionals in remote locations around the world to be trained in a fully functionally teaching hospital on an aircraft, which also supports efforts to operate, and treat hundreds of patients. The solution must be intuitive, easy to use and reliable.

Outfit a newly renovated MD-10 aircraft with state-of-the-art networked AV and automation technology to stream high-definition, live audio and video feeds from the operating theater, laser treatment room and other key areas of the mobile hospital to a 46-seat classroom located at the front of the aircraft as well as to local hospitals and around the world.

Donations, Volunteers, and Technology Help Visually Impaired Around the World

In September 2016, the Orbis Flying Eye Hospital®, the world’s only mobile and fully accredited ophthalmic teaching hospital on board an MD-10 aircraft, touched down in Shenyang, China. This event marked the 40th active care and teaching program conducted in China by nonprofit Orbis International since its inception in 1982. The MD-10 is the third-generation aircraft donated to Orbis by FedEx marking a 33-year partnership.In 2015 alone, the Flying Eye Hospital and its partner institutions conducted more than 2 million eye screenings and exams, 30,000 trainings for doctors, nurses and other eye care specialists, and nearly 66,000 eye surgeries in remote and underserved areas of the world.Having the ability to train even more eye care specialists, the state-of-the-art, third-generation Flying Eye Hospital was unveiled to the public in June 2016 during a seven city US tour, including a stop at the FedEx terminal at New Jersey’s Newark Liberty International Airport.The Newark unveiling was particularly poignant for the team in attendance from the Rockleigh, New Jersey world headquarters of Crestron.

Crestron founder, George Feldstein and his wife Lynda, both avid pilots and aviation enthusiasts toured the second-generation Flying Eye Hospital at an airshow in Oshkosh, Wisconsin in 2012. “After taking a tour, and learning that Orbis had a new plane planned, he knew exactly what he needed to do, and he knew exactly how Crestron could help.” said Dan Feldstein, Chairman and COO of Crestron. “He immediately went to work. Unfortunately, he passed in 2014 and was not able to see this come to fruition, but my parents instilled their passion for giving to me and my siblings. We are honored to be able to continue my father’s legacy and honor his memory in helping complete the project that he started.” The combined value of the equipment and integration services donated by Crestron is $300,000.In addition to Crestron, global support partners include Alcon Foundation, FedEx, Jebsen, L’Occitane®, OMEGA®, and other sponsors.

“There are 285 million blind or visually impaired people in the world,” said Bob Ranck, CEO of Orbis International. Eighty percent of them don’t have to be. Ninety percent of those impaired are in the developing world, and that’s where the Flying Eye Hospital operates. “There’s a difference between ‘give a man a fish’ and ‘teach a man to fish,’” Ranck said. “This hospital is about teaching a man to fish. This is about our medical colleagues on the eye care team: nurses, doctors, anesthesiologists, surgeons, biomedical engineers—the whole team—and helping to upskill them for challenges they face in their environment. We need our medical colleagues in the developing world to have the skills to address the problems of the patients they are seeing.” Orbis facilitates a community of more than 400 medical volunteers to lead training endeavors around the world. “Cybersight is our online telemedicine portal bringing the medical training and consultancy that we do on the ground to an online platform that ensures continuity of support and mentorship,” Ranck added.“In 2016 alone, we have engaged people from 129 countries for our Cybersight live teaching events,” said Dr. Danny Haddad, Chief of Program at Orbis. “This approach allows us to do more with the people we already have partnerships with—to increase the intensity and types of training we do with them—but equally important to also have an impact in places we could never work in person for lack of resources, lack of stability, conflict, etc.”A Global Platform“The idea is to give people of low and middle-income countries access to an equivalent—or as near-to-equivalent—standard of residency training that you’d expect to see here in the U.S.,” said Dr. Jonathan Lord who currently serves as Global Medical Director at Orbis.

“We can [stream an operation] and have live communication with a classroom at the local hospital. Or we can transmit [the recording] around the world ...” Dr. Jonathan Lord Global Medical Director Orbis International