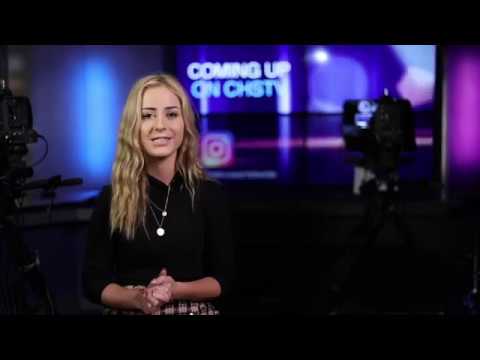 The newscast CHSTV produces is tightly crafted, visually infectious, incredibly professional, and produced entirely by students. Packed with live studio and field reports, guest interviews, and special interest features, each show encapsulates everything the students feel their peers need to know. The 12-minute HD newscast is seen live via the web, in classrooms via closed circuit, and throughout the region via local cable systems.

Students serving as on-camera talent and news anchors deliver the content with confidence, skill, and youthful exuberance. Their impressive, multi-camera studio includes a large on-set videowall and “Magic Window” touch screen display. A team of students executes the live show from the control room using not one, but two, NewTek TriCaster® live production switchers, along with broadcast graphics and audio mixing systems.

The energized pace begins at 7:30 a.m. when the students arrive at the CHSTV computer lab/classroom with no content prepared, and no idea of what role they will play in that morning’s newscast. Following a half-hour meeting with CHSTV Broadcast Teacher Douglas Green to brainstorm ideas and plan the rundown, the students collaborate on a pre-production workflow that includes researching topics, writing copy, gathering imagery, creating graphics, and editing video. By 9:00 a.m., there’s a quick run-through, and by 9:18 a.m., without fail, they unveil their fresh, original masterpiece.

With its array of state-of-the-art pro/AV tools and systems, CHSTV’s aspiring journalists can really hone their technical and soft skills to the point where they can be immediately valuable to any broadcast news, sports, or network TV operation.

Situated side-by-side in the control room, two “dueling” NewTek TriCasters are used to roll live video opens and packages and to switch and stream the show. A third TriCaster is used to live stream sports and special events from remote locations, while a fourth is kept in storage as a back-up. A companion TriCaster technology called Live Text is used to create broadcast graphics, such as lower third supers.

“The TriCaster is just a wonderful piece of equipment that gives our kids the opportunity to create freely on the fly. It’s sophisticated and full-featured, yet user-friendly for kids to learn quickly,” Green said. “It’s the foundation of a program that lets kids develop their creativity, character, and collaboration skills as they work in partnership to tell stories that they hope will make the world a better place.”

The adjacent, 900 square foot studio is equipped with two Panasonic P2HD studio cameras on dollies, a Canon C300 DSLR camera on a crane, two Sony XDCAM 4K camcorders, a GoPro, as well as a wireless, handheld Ronin-S “Fly Cam” that serves as a Steadicam to fluidly follow the action. The studio has a large anchor desk, an overhead lighting grid, two large video wall displays at the back of the set, and ample space for students to conduct guest interviews while seated on the comfy furniture or walking around the set.

Live feeds are brought in from additional cameras at remote locations—such as local events, restaurants, public places and sports venues—via satellite. This equipment, courtesy of a generous donation by ViaSat Corporation, includes two satellite uplinks that reside on the roof of the high school and its nearby stadium. Using this satellite gear, the students can transmit video signals at high-speed via a satellite 27,000 miles in space. At remote locations, the students also use a newsworthy Dejero bonded cellular transmission system to back-haul their live video signal to the studio for inclusion in the newscast.

Since Green applied for and received a 501c3 non-profit designation for CHSTV, it’s easier and more appealing for broadcast technology companies to donate equipment to the program since it’s tax deductible. The region is also rich with broadcast news professionals and engineers that occasionally offer their advice and technical expertise.

According to Student Producer/Journalist Kelsey Beekman, “The studio is equipped with a full editing lab. Each computer contains Final Cut X and the Adobe Production Suite. Students can use these computers to edit their stories, do research, and to find upcoming events to cover. Our newsroom is also furnished with four soundproof editing bays perfect for editing stories and recording voice-overs. We’re grateful to have a studio that helps students produce their best work.”

Green—named 2016 California Teacher of the Year—founded CHSTV in 2002 to give students who were learning about video technology and broadcasting at the district’s three middle schools the means to further develop their skills and talents in high school. Today, 90% of the students in the CHSTV program come from those middle school programs, and as a result, arrive with a fair amount of video production proficiency. Upon high school graduation, CHSTV students typically go on to study broadcast journalism and other media arts at places like Syracuse University, University of Missouri (“Mizzou”), USC, Arizona State University’s Cronkite School, and Chapman University, in Orange County, CA.

Every student is expected to work in each technical position—both in front of and behind the camera—during each grading period. To ensure fairness, the students draw popsicle sticks—each labeled with the name of a specific task or role—to determine who does what for the day’s newscast.

The students also take turns delivering an interactive presentation using the Magic Window, which is a giant touch screen monitor. They’re able to speak extemporaneously about their chosen subject, without the help of a teleprompter, since they’ve done their own research and compiled the accompanying imagery. The students are also expected to produce a feature segment on any topic of their choice every three weeks. On deadline day, several student/content producers evaluate the video clips for use in the newscast as well as grade the work.

“One of the strategies we use to keep the show engaging is something we call “the rule of five,”” Green said. “This means that there must be at least five different segments happening within each 12-minute show to hold the interest of the students watching in the classrooms.”

Since there are many students in the program, Green teaches two different classes of students according to a rotating block schedule. In what Green calls “magical chaos,” there may be 12 or more students in the studio serving as anchors, interviewers, camera operators, floor director(s), teleprompter operator(s), and production assistants, with many more in the control room serving as technical directors, producers, and graphics operators. The key, he says, is that they must all communicate clearly and effectively with each other in order to have a successful outcome.

“One reason we’ve been so successful is that we attract students who really have a passion for telling stories, and who embrace this concept that, as journalists, we are the voice for the voiceless,” Green added. This is especially true for the documentary films the students have produced on such hot topics as vaccines, food banks for struggling military families, and cool jobs for the new age. For one documentary about the Holocaust, a group of students raised money to travel to Germany several times to capture and tell that historical story from a youthful perspective.

The documentary work is actually commissioned by professional organizations and corporations. The students pick the projects that interest them, and this work generates vital revenue that funds the CHSTV program. Other sources of revenue include grants, fundraising, and a parents’ booster club. Together, this income helps defray the many onerous, on-going production costs, such as the satellite service associated with the ViaSat systems, and the bonded cellular service associated with the Dejero remote transmission system.

“When a student first begins to learn the TriCaster system, they partner with more experienced students, and within an hour they’re operating at full capacity for a live show,” said Nick Francis, a junior in the CHSTV program.

“When I was in the control room and switching a live show for the first time, I was biting my nails. I was super nervous…but came out the other side alive! And now, whenever I face a challenging new situation, I’m able to handle myself with so much more poise and confidence,” Francis added.

According to Finley Dicus, another CHSTV sophomore, “The TriCasters are the heart of our controls, from the beginning when we’re ingesting footage and recording our show open onto it, till the very end, when we’re broadcasting to over 3,000 students. And the entire way through, it’s dependable, powerful, and user-friendly.”

While CHSTV Sophomore Miles Fesler serves as a TriCaster trainer to other students, he’s still discovering amazing things about it. After he trains one student, that student pays it forward by teaching other students. “This shows how great the TriCaster is as a new piece of technology that lets anyone pick it up relatively quickly. We can have eight different cameras that can be switched in an instant. This lets us have a lot of flexibility in our show, and really lends itself to a really great broadcast.”