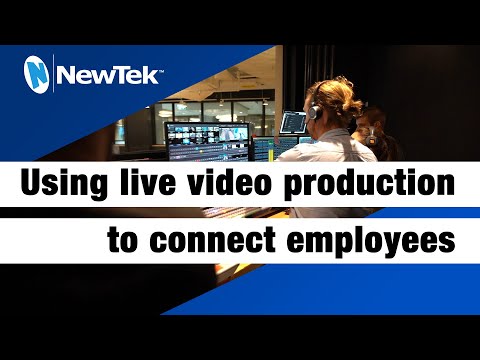 Ottawa-based Shopify.com exists to supply entrepreneurs in every corner of the world with the tools they need to start their own businesses. From creating a brand to managing orders, shipping and payments to setting up a business website, Shopify.com makes it easy to launch a new business.

Since its inception, Shopify’s focus on the entrepreneur has given the company a uniquely entrepreneurial culture. At the fulcrum of that culture is the need to quickly and efficiently share information company-wide. Having a workforce sprinkled all around the globe makes this compulsion to communicate difficult. But moving into the future, with a new production facility featuring NewTek products, and with the added flexibility provided by NewTek’s NDI technology, Shopify.com is poised to continue providing it’s customers with the necessary tools to survive in the new entrepreneurial economy of the future by motivating its workforce.

“The product we put out is a “Wow” product,” says Zack Duncan Broadcast Lead at Shopify.com. “It’s something that makes our employees stop, take notice, and walk away remembering what they saw. Our main goal on the broadcast team is to always give people who aren’t present in the moment the experience that they were actually there. We want everyone at Shopify to have an immersive experience and feel that they are all valued members of this company, even if they aren’t sitting in the front row.

“To do that, we need a product that’s going to work consistently, again and again, and that’s why we’ve chosen to use NewTek products. Without NewTek, I think the future of streaming at Shopify would be bleak. With our new facility, we never have to worry about whether our equipment will survive the next hour of broadcasting. We never have to worry about how we’re going to scale up what our broadcast streams look like. That’s all taken care of because we’ve implemented NewTek, and now, we feel supremely confident we can create a consistent, quality broadcast.

Connecting the Dots on a Global Basis

“What the broadcast team tries to do is make this international company feel much smaller, by allowing our employees to connect, regardless of where they are around the world, ” Duncan tells me. “We give our employees a chance to communicate whether they’re in our office or work from home remotely, whether they’re in Europe, North America, South America, anywhere on the globe. Shopify has a strong investment in the remote workforce. Even those who work in one of our offices are allowed to work remotely. Our mission as a broadcast team is to allow you to stay connected to the office spaces and not feel isolated just because you decided to work remotely. Our people based in remote locations might be the only Shopify employee in that entire country, but we want them to have the same advantages and the same access to content through what our team creates.”

Jesse Makort, Broadcast Infrastructure Lead at Shopify.com agrees, “The better we’re all communicating with one another and up to date about what’s going on in the company, the better we can do our jobs and keep pace with the growth and productivity that Shopify has established.  Video is how we connect everybody across the world that’s a part of the Shopify journey. To that end, we run many livestreams every week. Typically, a stream will highlight a particular product or service line. We have many.”

Most of Shopify’s vast library of content is produced out the company’s Ottawa headquarters. As many as a dozen livestreams originate out of the corporate hub each week, all designed to assist Shopify employees wherever they might be based. After each live broadcast, the content is immediately made available online to facilitate viewing in time zones where viewing the stream live isn’t feasible. Some of the livestreams are simple and some are quite complex.

”The list gets extensive,” Duncan tells me. “We cover everything from Show and Tells to product demos to Ask Me Anything’s, where employees can pose questions to the executive team or external guests. There’s a unique feel to every stream we do.”

“A lot of our broadcasts would be similar to Ted Talks,” Makort says. “Typically that’s a presenter with slide content or video or audio content as support. Shopify also produces internal podcasts for people to digest. Each quarter, we run even bigger productions that have an Academy Awards ceremony feel to them, with large, live audiences. Then, sometimes we have intimate Fireside Chats with executives to pick their brains or hear about important things that are going to be happening within the company down the road. We also produce a lot of fun, informational video content as part of these greater presentations. So, it’s a wide range.”

Just like the entrepreneurial base the company serves, Shopify.com has experienced tremendous growth in the past few years, which, as most small business owners will tell you, is both a blessing and a curse. In Shopify’s case, the company’s amazing growth has been tremendous, but it’s also strained the broadcast team’s ability to maintain communication with troops around the world. The team feels as if that ability has been a major reason for the company’s success to this point, and they don’t want to see it impeded in any way. Adding to the frustration, with it’s ever increasing workload, the broadcast team has also begun experiencing increasing equipment difficulties getting their work done in a timely fashion. Production complications have severely hampered Shopify’s ability to disseminate content efficiently.

Makort tells me, “The number of videos we’re asked to provide has grown pretty high, and there’s a limit to what we can do” Zack Duncan says. “We’re always troubleshooting and tweaking problems, and it’s not allowing us to be as efficient as we could be.”

In order to alleviate these problems, in March of 2018, Shopify.com began an ambitious construction project in its Ottawa-based headquarters. With the help of Toronto-based reseller, Videolink, and after doing copious research into finding the best equipment available while also getting the most bang for their buck, Shopify made the decision to purchase NewTek equipment to address its production issues.

“With our new system design, we’ve moved to a TriCaster TC1 system with some NC1 expansion modules for extra inputs,” says Jesse Makort. “We also own a NewTek Connect Spark Pro. In addition, we have some other third-party NDI-capable devices. It isn’t NewTek gear, but one of the beauties of NewTek and their open source NDI protocol, is that it opens the door for such amazing creativity and collaboration across a wide range of companies and hardware.”

“As Shopify scales up our operation, we’re producing larger and larger shows, and trying to pull off things that we weren’t capable of accomplishing a year or two ago,” Duncan says. “With the variety of equipment we’ve been using, sometimes it’s a hit and sometimes it’s a miss. Now, we’re looking for reliability and consistency in our broadcast gear and NewTek brings us that.

“The biggest reason that we chose NewTek is that it streamlines a lot of our process. We’ve been using a variety of tools and it’s become this kind of Frankenstein broadcasting operation. NewTek gives us all the solutions in a neat, streamlined package.”

Once the Dust Clears

With their new production facility under construction, the company has ambitious plans for their new internal communications hub. Once the new facility goes online, Shopify will be ramping up productions across the board, looking to add to their already complicated streaming presentations.

“We use four or five cameras in a typical broadcast, three main angles for following the action on the stage,” Makort says. “Then, we add peripheral cameras to capture audience reaction, as well as a wireless camera when necessary. We like to add a wireless camera on a gimbal to get that up-close-and-personal angle and give a more impactful feel if we’re roaming around the audience. It’s not unusual for us to use up to eight cameras to stream a big event.”

Connect Spark Pro and NDI: The Ultimate in Flexibility

The broadcast team is also looking forward to using their Connect Spark Pro to enhance upcoming broadcasts. The Connect Spark Pro is NewTek’s revolutionary device that allows a signal from a camera or other video output to be wirelessly transmitted as an NDI source.

“The Connect Spark Pro is a very versatile tool for us to use in a variety of ways,” Makort says. “We can use it to easily bring in another laptop as an additional source feeding into our TriCaster if we need it. Or in a more versatile way, we can use it to create an entirely different space in our office that we can use as a set by connecting the Spark to an Ethernet connection on the wall. The Connect Spark will convert a camera signal, or multiple camera signals if we’re feeding them through a switcher, into our network, so we can pull the source into the TriCaster. It could be many floors away or even in a different building by leveraging our network team’s strong network infrastructure.”

According to Zack Duncan, using NewTek’s groundbreaking NDI technology within Shopify’s network will offer the broadcasting team incredible versatility, allowing them to connect a huge range of video sources to their newly purchased TriCaster TC1. “We’re expecting to spend far less time troubleshooting and leveling up our gear,” he says. “Now, we can just do our jobs and be as productive as possible. It will allow everyone to be creative and innovative, focus on their work, and not worry about whether this piece of gear or that will work or not. In that sense alone, NewTek will help us be much more productive than we’ve been in the past.”

Communicating With the Entrepreneurs of the Future

“The future of broadcasting at Shopify is completely open to whatever we want to do now. We don’t have to stress, because we know NewTek has our back, and we’re confident we can tackle whatever challenges the future holds.”

TriCaster TC1
by NewTek, Inc.
Model: TriCaster TC1
Thank you!
Someone will be in touch with you shortly.
Contact Visual Sound, Inc.
close